In English:- Why I like the Character of Devdas, Bengali novel by Sarat Chandra Chattopadhyay :-

0
by Madhava in In English Language, As I Think, English Content
Devdas was the most innocent character who is stuck down by fate, by misfortune. Though born in a wealthy Jamindar family he was subjected to abuse in the childhood. Everyone was showing authority over him. For example, he was frightened of the authority in the school; he was frightened of his brother… The only
person who willingly submited to Devdas’s authority was Paru. Paru has submitted herself to the authority of Devdas because she was in Love with him. Where as Devdas was confused with his inner feelings, he couldn’t handle the love of Paru because he had become insensitive to his inner feelings. He became psychologically numb to his feelings because of all the childhood abuse he faced. That is why he could not feel the love of Paru when she came to his doorstep and begged “give me a place at your feet Devda” He didn’t know how to understand Paru’s love. He had let her go, without knowing why he was letting her go!

Finally when he lost Paru he went on to self-anesthetize by drinking alcohol. All that he was seeking – was an escape from the pain caused by Paru’s separation. By the time he realized his true love towards her, it was too late. He lost his life for alcohol abuse! He died trying to reach her at her doorstep. The only consolation is that he never lost Paru’s love, he only lost her to the fate! Because she tried desperately to reach him when she came to know there was someone who died at her doorstep. She didn’t know it was him, but yet somehow she feared it may be him. And that was her love. It was his fate to lose his life…. He was a true winner of love, yet miserable loser in life.

Over all, Devdas is a fantastic character. I only have tears for this character. He is the most innocent of all. If Paru were real she would have taken more care, rose above her love in time, and adopted the inner-child of Devdas. They would have made a beautiful couple. 🙂 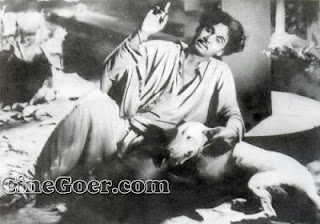