People often accuse Gandhi saying that Ganghiji wrote a chit during the congress committee meeting and asked Patel to withdraw his nomination and Patel obliged without a question.

This accusation towards Mahatma Gandhi is totally false!  Yes Gandhiji gave a chit which to Patelji which Patel immediately tore. But it was Patel who asked Nehru to take up the PM position. But no one knows what was actually written in the chit. Neither Gandhi nor Patel ever spoke about what really transpired between them before the election.  The rest of is purely speculation by the people who harboured unnecessary hatred towards Gandhiji. I researched Gandhi extensively.   At least I couldn’t find that chit in my research where Bapu asked Patel to give up the PM position. I believe it is pure speculation to even think that Gandhi made Patel withdrew.

Let us first investigate what was actually Gandhiji thinking.  We get a snapshot of Gandhiji’s thinking from Maulana Abul Kalam Azad’s interaction with Gandhiji the night before the elections. Nehru wanted to become PM but Nehru was not sure of Gandhiji’s support.  Therefore Nehru sent his friend Maulana to Gandhi seeking support.  But Maulana says that Gandhiji ‘was not whollly pleased (sic)’ with Nehru’s name.  Please see below page 163.  I underlined the point that Gandhiji was thinking of Patel as PM. 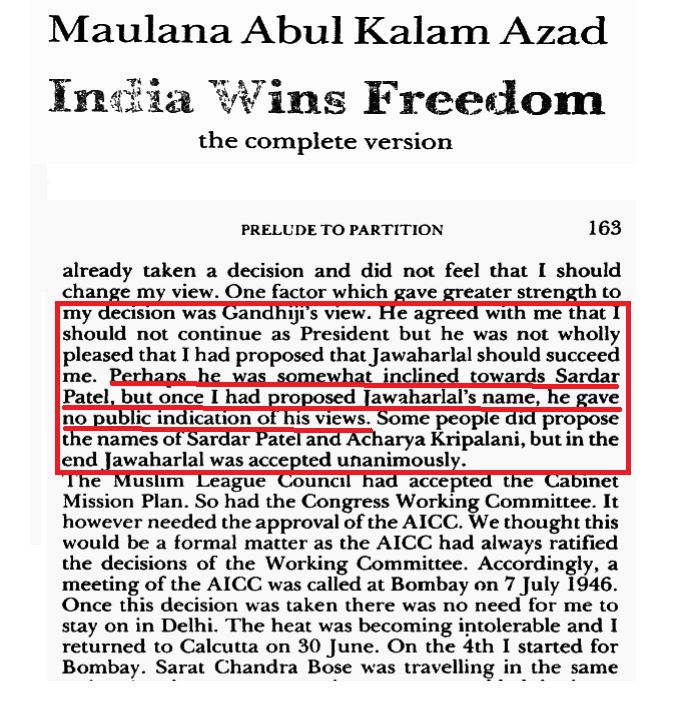 Mahatma Gandhi and Sardar Patel were best of friends. In fact, Sardar Patelji entered Indian politics during 1917 based on the advise by Mahatma Gandhi. Gandhiji had always taken the advise of Patel before he did anything. I have strong reasons to believe that It was Patelji who took the decision to make Nehru the PM of India.

Reasons why Patel wanted Nehru to be the PM of India.

1) Sardar Patel ji was a known Conservative party supporter. In fact, most of the All India Congress Committee Members were right leaning. All of them were Conservatives except Jawaharlal Nehru who is the only confirmed Socialist and a British Labour Party member.

2) None of the Congress committee members liked Nehru and they all elected Patel to be the PM. Nehru was visibly upset.

4) Patel ji and Gandhiji discussed their strategy at length. Their only aim was “Purna Swaraj” they wanted independence at any cost. They were convinced that Labour Party will not hand over the Government in the hands of a Conservative PM of India. In case Patel was the PM candidate then the freedom will get delayed. They had to wait for some more time. They were not ready for that. So Patel ji decided it is best to show Nehru as the PM candidate and run all freedom negotiations through Nehru. That was what had happened. Nehru was nominated. Labour Party in UK was at ease in discussing the terms of freedom with one of their own socialists. i.e. Nehru!

5) Patel ji had another personal reason. He was an ailing person by that time. He was physically not well. He underwent heart problems. He told Mahatma Gandhi that his health is not fit for the PM position. He was concerned that his health may not cooperate and stand for the stress that the position of the first Prime Minister of India demands! He did not want to go down in the history as the first prime minister of India who died with out completing his office. This is exactly happened! Patel ji died on December 15, 1950 just with in three years after India became independent. That means if Patel were the PM he would have died with out finishing his term of office.

So it was Patel who decided that Nehru a Socialist and a Labour Party supporter must be the Independent India PM candidate so that Labour Party in UK will feel at ease in giving away independence. It was an extraordinary sacrifice by Patel.

Nehru knew this that Patel was the rightful heir to the throne of PM. That was why Nehru was always hostile to Patel. Like all socialists who come to power, Nehru purged all Conservatives and Liberals from Indian National Congress after Patelji’s death.

Nehru also knew Gandhiji was favouring Patel as PM candidate. That was the sole reason why Nehru sent Maulana to Gandhi.  Gandhi must have expressed concern about how to reign in Nehru after he became PM.  So Patel must have told Gandhi that let the election take place.  As per Patel’s wish the election happened and Patel was in fact nominated as PM candidate.  Nehru came to know he has no support.  It was at that time Bapu wrote a chit to Patel.  So if I understood the strategy of Patel correctly then in that chit Gandhiji may have written “Dear Patel, I sincerely think we made the point clear through this election that you are our favoured choice of PM.  But we know Labour party in UK will not give away independence into your hands.  Independence will get delayed.  This is not our wish either. But Nehru may by now understand that he has to go by the wish of all leaders. Especially Nehru must know that he has to listen to your advise and go by you as you are our first choice.  Therefore I sincerely hope Nehru will listen to your views in future. Now it is entirely up to you how you want to decide.  I will be supporting you if you want to be PM”…. It was then Patel tore the chit and asked Nehru to become a PM.

It makes more sense to think Bapu wrote like the above because he always consulted Patel in many ways. They are closer than anyone else could imagine.

However later when Nehru turned hostile. Contrary to earlier belief he stopped listening to Patel.  Patel was clearly pained.

Therefore Patel requested a meeting with Gandhiji.  Patel complained that under Nehru the interests of Hindus in  independent India are getting undermined.  Gandhiji agreed.  So Gandhiji and Patelji planned a secret retreat. The rumour was that they both did not like the way Nehru undermining the interests of Hindus. Gandhiji wrote a handwritten note to Nehru insisting upon Nehru to become a true Jawahar (jewel) to Hindus. But Nehru did not bother. Nehru was very upset when he came to know of this planned retreat of Gandhi and Patel. Alas fate had other plans, Godse assassinated Gandhiji before any solid plans for a solid sanatani Hindu India “Ramarajya” were taken shape. 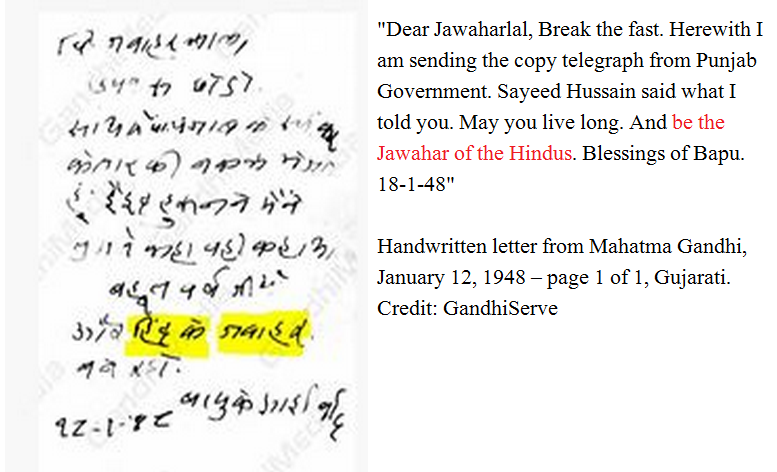 In an excruciatingly painful letter just about two months before his death, a terminally ill Sardar wrote to CR Rajagopalachari, referring to the pain he was being made to undergo by Jawaharlal and his insupportable ways:

It is painful to prolong this process of mental torture and we must end it now as I see no hope… I have gone to the farthest extent… but I see that it is all no good and we can only leave it to God. (13.10.1950)
On 9th december just fifty days before Mahatma Gandhiji’s assassination.   Mahatma Gandhi wrote two very very important letters. First Bapu reaffirmed his trust in Patelji – NOTE in the following letter “The Sardar’s view seems quite right to me.”

I had a talk with Sardar Patel about the Muslims from outside who want to settle in Delhi. He says that he has no objection to nationalist Muslims settling in Hazarat Nizamuddin if they wish, whatever their number. But he is against bringing Muslims from outside, to be rehabilitated in the interior of Delhi in houses now evacuated. For, if the Muslims now evacuating these houses return, where will they be accommodated? Secondly, if Muslims from outside are rehabilitated in these houses the Hindu and Sikh refugees who cannot find accommodation are bound to object and argue that while they have not been rehabilitated outsiders are brought in for settling. The Sardar’s view seems quite right to me. Therefore you may bring the nationalist Muslims and help them settle in Hazarat Nizamuddin.

These outsiders should not be accommodated in the city’s interior. From a copy of the Hindi: Pyarelal Papers. Courtesy: Pyarelal

The special retreat Gandhiji and Patelji planned was rumoured in papers. On the same day December 9th Bapu said about this retreat in the prayer meeting:

You will have seen in the papers today a report saying that Sardar Patel and I are going to Pilani. Why? For a change of air. It is a mere canard. I do not know what the Sardar has in mind but I certainly know that this is not the time to seek a change of air. The Sardar  works all day long and rests at night and that is all the change of air he gets. The same  applies to me. It is true that I am not so overworked because I do not have to run a government. But I receive many visitors and I get tired. Therefore I have to give myself rest. The air is quite congenial in Delhi at present and there is no need to go out for a change of air. What can Pilani offer? So far as I am concerned I have taken a pledge to do or die. I have not fulfilled that pledge. I cannot understand why newspapers publish such rumours. I can only conclude that a large part of what the newspapers put out consists of falsehoods.

Unfortunately Mahatma Gandhi was assassinated by Godse before the planned retreat between Patelji and Mahatma Gandhi was announced to the public. I suspect vested interests who did not want Ramarajya to take shape in India had a hand to stop it by assassinating Mahatma.  Therefore I personally consider Godse was the greatest traitor of Hindu dharma.

TIMELINES TO REMEMBER
1) December 9, 1947 – Bapu supported rehabilitation of only Nationalist Muslims as per the advise by Patel ji

2) December 9, 1947 – Secret Retreat between Bapu and Patel ji was rumoured and confirmed by Bapu that such a plan is in place but it will not take immediately. It was planned for February 6th 1948.

4) January 30, 1948 – Mahatma Gandhi was assassinated.
Excerpt from the book: ” With No Ill-Feeling to Anybody“, Sri MKK Nair, IAS officer served under Patel.

“Sardar Vallabhbhai Patel, the then Deputy Prime Minister and Home Minister of India, was insulted, humiliated and disgraced by the then Prime Minister, Pandit Jawaharlal Nehru, during a Cabinet meeting. “You are a complete communalist and I’ll never be a party to your suggestions and proposals,” Nehru shouted at Patel during a crucial Cabinet meeting to discuss the liberation of Hyderabad by the Army from the tyranny of the Razakkars, the then Nizam’s private army.

A shocked Sardar Patel collected his papers from the table and slowly walked out of the Cabinet room. That was the last time Patel attended a Cabinet meeting. He also stopped speaking to Nehru since then.”

No comments yet. Be the first!
Click here to cancel reply.
Leave a Reply