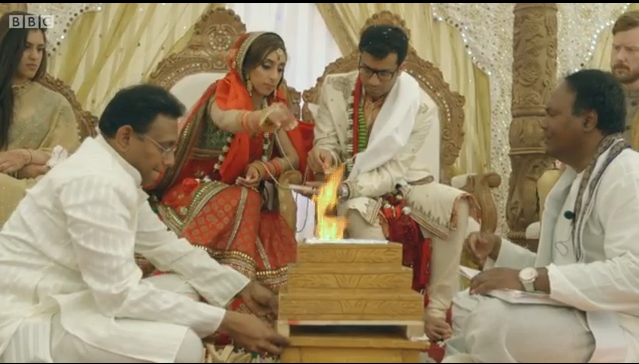 by Madhava in In English Language, As I Think, English Content, sanskrit, ఆధ్యాత్మికం 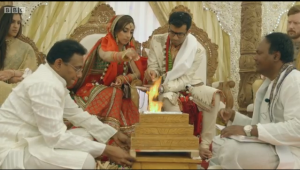 Information: Someone sent me a question regarding Hindu marriage tradition – I thought the answer would be useful to all of you.

Question: After donating the bride (kanyadanam) do parents have any rights and responsibilities towards the girl?! are parents expected to wash off their hands completely after kanyadanam?! Also what advise is there in our scriptures for a happy married life?”

In HIndu marriage tradition “kanyaadanam” is misunderstood as “donating a bride”. I heard some priests give out a wrong meaning to the word. They wrongly interpret it as “kanya (girl) + daana (donation)”.

In Hindu vivaaha (marriage) the groom sends out a search party to find a suitable bride. He conveys through the priest that for his sake he wants to choose a bride (madardham kanyaam vruneemahe) – this particular usage of word “Vruneemahe” conveys a very reverential meaning. It means he wants to choose a wife with love and respect. A wife who he could treat properly. In our Veda where ever the word “Vruneemahe” is used it is always invoked with respect and reverence. For example see below verse from Rigveda where the invocation says “hotaaram tva vruneemahe”.

Though It is true that bride’s parents do give the bride into the hands of groom, they still hold life-long parental bond and parental responsibility towards the bride. It is understood that they are giving their daughter into the hands of an able groom who promised them – ‘that he will fulfil his moral obligation towards her as a husband (dharma); that he will provide her financial security (artha); that he will have conjugal relations with her (kama). Therefore it is the responsibility of the husband to make sure that his wife is reasonably happy in his company’.

Hindu marriage is seen as two souls come together in union of love. Both bride and groom are two consenting adults. But the husband has to keep up to his promises. Therefore he has to look after her well, he also should fulfill the wedding promises he made to her parents and also to her!

In Ramayana we all know the story of Kikeyi. She is the wife of Lord Dasaratha. She asked her husband a boon. She wanted to send away Lord Rama to forrests. Lord Dasaratha obliged that. This sounds absurd. Why can’t Lord Dasaratha simply overrule his wife?! Sure he can do such a simple thing. Why did he send Lord Rama to forrest when he knows that his wife is asking of him a wrong thing!? Though he chose to disagree with her, plead with her, he obeyed his promise to her. He sent away Lord Rama to forrests! Dasaradha did that because he is honouring his conjugal responsibilities. Same is the case with Seeta. Lord Rama knew how absurd it is to find a golden deer in the forrest, yet when Sita wanted to capture such a deer he obliged! I mentioned these two instances as an example to convey you how how Hindu marriage custom was set. It is plain and simple “A good husband must Honour his wife’s wishes”

Valmiki Ramayana contains pearls of wisdom towards marriage. Seeta was about to follow her her husband into the forrest. She goes to seek the blessings of her mother-in-law Kausalya. And the words of wisdom Kausalya offers are memorable:

Meaning:
Embracing in her arms that princess of Mithila (Sita), who never behaved in self-pity, and smelling her head(as a token of affection), her mother-in-law(Kausalya) spoke as follows:(19)

“Dishonest women, eventhough adored all the time by their husbands, cease to esteem their husband who has come to pass into evil days, throughout this world.”(20) “Having enjoyed happiness in the past, they become spoiled and even desert their husband, on obtaining even the least misfortune: such is the nature of (bad) women.”(21) “Young women, who are evil-minded, are untruthful in their disposition, are affected by passion and their essence, incomprehensible. They get aversion within a moment.” (22) Neither a noble descent, nor an accomplishment, nor learning, nor a gift nor even entertainment can capture the heart of women. They are unstable of their heart indeed!” (23) “But, for women established in good conduct, truthfulness, sacred learning and mental quietness, their husband alone is the most sacred entity, the best of all.” (24)

So you can see from the above pearls of wisdom that “for women established in good conduct, truthfulness, sacred learning and mental quietness, their husband alone is the most sacred entity, the best of all.”

Only – in-spite of her genuine efforts, when a housewife finds herself in a situation where she is not happy in her married life then she has every right to do what she wishes! There is scriptural permission for her to do so! She also has every right to break such an unhappy marriage. She can walk away! For example in Vishnu Purana we find a story of Lord Vishnu and Goddess Lakshmi. Following a spat with Lord Vishnu, Goddess Lakshmi left her heavenly abode and came down to the earth. She walked away from him and settled down in Alimelumangapuram. This is the story of Lord Balaji of Tirupati. Lord Vishnu came down in search of his wife and settled down as Lord Balaji in Tirupati.

As far as I understand, in Hindu tradition a man can not break his marriage no matter how ever much he wishes to do so, but a woman can break her marriage and walk away. A man has to obey the wish of the lady and let her go free! He may try to persuade her but he can’t force her!

Such a marriage based on the understanding of our tradition never breaks! But the moderen day living devoid of understanding our scriptures is causing a lot of marital distress. The only way out of this predicament is for the couple to start understanding our Hindu scriptures and traditions. Especially all hindus must read Valmeeki Ramayana and Vyaasa Mahabharata and get proper understanding on our ancient Hindu life and culture.