As I think – UK Labour Party and socialism 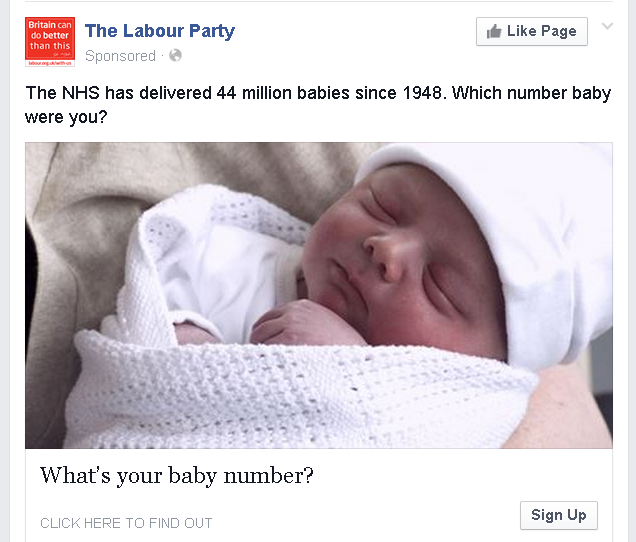 ROFL! I just saw a paid advertisement by Labour Party about NHS saying that it has delivered 4 million babies. It is amusing because, it sounds as if the human world did not deliver babies before the arrival of NHS. Baby delivery/birthing is a natural phenomenon – no NHS is necessary to pamper humans for baby delivery. What is happening in reality is that in the name of NHS the socialists helped set-up huge pharmaceutical companies profit. i.e. they helped the very imaginative devil they thought they are up against! Who is paying for NHS?! Me the tax payer. I confess, I am not against people who support Socialism. I have a lot of socialist friends. I understand all humans have their flaws.  But I am only against the ideology.

I feel that we are missing the bigger picture of our lives as humans, our place on this planet earth our place in the nature… Socialism firmly believes in one life theory. Though they don’t explicitly say such a thing that they believe in one life theory, their ideology allows humans to heavily depend on a welfare state – a big state which can totally fail during the times of human calamity and personal trauma.

Every human should take responsibility for his own life. The law of Karma which is embedded in Buddhist, Jain and Hindu philosophies say that beings take birth again and again. Each life gives us a unique opportunity to learn lessons. Gratitude is one of those lessons. But Socialism because of its clinical execution of welfare – removes the word “gratitude” from the book of the welfare recipient. As I see it – Socialist State becomes a wall between the person who is donating the money (tax) and the person who is receiving it… The tax payer and the welfare dependant never face each other! As a direct result welfare recipients become psychologically unaware of the fact that the tax payer had to work very hard to pay his tax!!

I think in Socialism the word donation does not exist. As a result majority of the welfare dependent citizens never learn how to connect and be grateful. I know cases of welfare dependants who walk through the JobcentrePlus and violently demanded their money. There is cruel world out there. Nature is cruel. But beings are also blessed with a unique ability to be compassionate. But I think socialism makes otherwise healthy humans to become less compassionate and ruthless.

And that is why welfare recipients start demanding support for silly things from the Socialist state. Otherwise it makes no sense why NHS had to pay almost £5000 tax payers money for breast enlargements for a girl! That is encouraging artificial lifestyle. She can get her enlargements done with her own money. But not my money – tax payers money. I think by encouraging artificial lifestyles socialism denies citizens a choice of personal reflection and learning. Given a choice I would not allow NHS to do such silly things with my money. I would not allow government to do silly things with my money at all! But unfortunately this is the real problem with a big-brother-Socialist-welfare state. The state snatches away hard-working citizens money with brute force, and it decides where to spend that money. Unfortunately it spends tax payers money on all sorts of silly things… Socialists twist my arm and make me pay for things which are against my ethical/moral values, which are against my religious beliefs. And that is my problem with Socialism.. I hope one day all humans collectively wake up from this bad socialist dream of utopia and take responsibility for their own personal lives. I hope one day they stop sleep walking towards their destuction. -Madhava Turumella